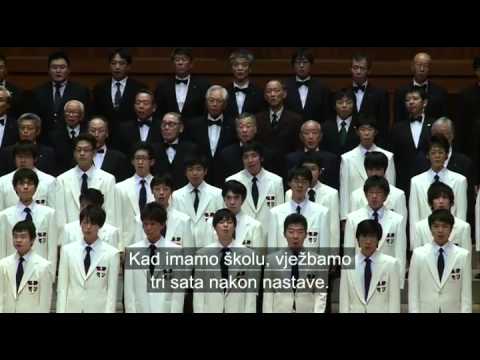 Song (To battle, to battle!) from Croatian opera Nikola Subic Zrinski already 100 years used as an universities anthem in Japan.

After the end of World War I, an American ship Hefron, evacuating Czech and Slovak soldiers from Siberia, perhaps with a few Croats on board, was damaged by a storm and was forced to settle in the Kobe harbour for 2 months for repair. During that period, the soldiers transmitted the tune to the members of the oldest and the most renowned Japanese male choir of the Kwansei Gakuin University, established in 1899. Their repertoire hosts the song (which is learned not in Japanese, but in genuine Croatian) to this day, ending with it each of their public performances.

The songs inspiration is from battle where ~ 2500 Croatian and Hungarian soldiers were fighting over 100k ottoman solders. They refused any surrender. It was the last and the worst battle for Suleiman Magnificent.