How good VB2 really is!

came tomorrow and the same table had a 2e minimum i hit every third spin because the scatter was kinda bad , it either stopped where it hit or went across half the rotor
i got 3 successful hits one in number and the 2 other 1-1 next to the predicted and left with about 50e or a little more

Last night i went in another casino where the table was 2e minimum waited and practiced for an hour to see time and if there was a DD
Hit the first spin but they didnt want to payout because the didnt accept number 3-3 announce bets , after some arguing they paid out

a decided to play 2-2 and place the remaining 2 numbers my self…
because i was a little frustuated and lost my feeling,calculation i missed 6 spins or more i dont know in a row and was down about 100e or more but then…
i hit 7-8 times in a row

- 2 exactly in number and 2 or 3 1-1 the rest was either last or second and left with 600e in my pocket which is a 2 month salary over here.My best friend who is an athlete,skeptic and who hates gambling coundnt believe it - he even said play more,lets not leave…
I think my main problem is rotor because i dont really apply it well , i add 5 pockets for one number but i think sometimes maybe it was 2…but its a good start and with practice it will get better i hope…

id like to thank Forester especially for all the help and everybody else here for making all this possible
This community is great and what you are all doing here . . . thanks again really

i like to add that i spent a year here reading all the posts and learned VB which helped a lot to improve VB2 and the understanding of the game better
Last night i tried to apply traditional VB on jafcos rotor with no luck thats how good and easy and better VB2 is to me:D
I spent a lot of my life playing video games(strategic like warcaft,dota etc.) which i also think help a lot in making some decisions about the bets…somehow i managed better to feel and subconsciously know and see after 2 sec where the ball was or where the ball will land
so my tip is use any personal skill you have to help improve your game

Thanks all and good luck,but dont depend on it

And for some time I played traditional VB. It started coincidently , not sure for which reason I tried it instead of VB2 and it went very well, so I’ll keep going.
Use metronome 1 sec time 2 x to clock rotor and one sec to strobe the ball.

VB2 is only one of the tools to play.

Thanks all and good luck,but dont depend on it

HAHA, you told me last time you not going to work any more.

I did and i hope i wont

i said it badly , my bad… i ment dont depend that “luck” will earn you money on the table because we are all AP’s here

When you say, " …and one sec to strobe the ball." Are you just timing the ball at 1-sec/rev in the upper track relative to a stationary point, or D (a true ball-only revolution), or are you timing the ball against some rotor number (say, 0)?

I do it to upper track relative to a stationary point.
When the ball in one sec makes one rotation, in next one it looks as it slows down the most, noticeable difference looks as a 4 pockets.
I moved the observation point based on clocked rotor movement.
Next I wait until the ball crosses that point and read the number.
I know this is wrong I should read the number when the ball is actually at constant point of DD but as this it works very good so I do not care. 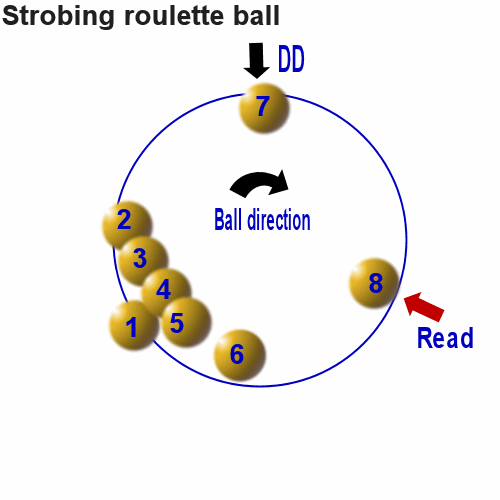 Position 7 is where the dominant diamond is, position 8 is my point where the ball actually stops based on previously taken rotor speed and in a relationship to number taken at DD (position 7)
Let’s stay at first vibration the ball is at position 1, after one second it is at position 2, then 3,4,5 and finally 6. Position 6 on this wheel is easier to notice since the difference the ball makes is the greatest.

At that moment I identified the particular ball revolution. I should wait until the ball completes full rotation and comes to the point of DD, then at that moment read number at position 8. But instead I wait until the ball reaches position 8 and then read the number. It is could be 4-5 pockets difference since the rotor is not fast but it is easier for me to read it that way and it works ok.

So, ball is faster than 1 sec-rev from reading 1 to 2. Then between 2 and 3 it becomes slower than 1 s-r, with a linear deceleration until 5. Reading 6 is the first nonlinear (and noticably slower ~4 pockets) ball rev that queues you in to a particular ball rev from the end (like traditional VB).

At the instant you see position (reading) #6, could you immediately glance at the DD to observe a rotor ref number, instead of waiting for #8? It might buy you a little more time if dealer calls NMBs.

Thanks Forester, this approach is way cool 8)
It puts another tool in our bag of tricks. What do you call this? VB3?

but could an observation be made at point 3 - where the ball reverses its direction (relative to the 1-sec timing), or is this too early, or too hard to notice?

When the ball reach particular speed then difference in between rotations can be noticed easier.
Let’s say 2,3,4,5 is hard to differentiate in-between them.

could you immediately glance at the DD to observe a rotor ref number, instead of waiting for #8?

Perhaps I can if I practice more, reason why I don’t do it is because I play for years reading what is under the ball when I get signal.

Using metronome timer is good tool better then counting, to time rotor I use 2 sec (2 pulses)

What do you call this? VB3?

No, people play this way for years. It is rally modified Scotts cross pattern.
Some people instead of timer use rotor checking how many pockets rotor moves until the ball makes one rotation. Then get triggering moment when amount of pockets suddenly increases.

are you timing the ball against some rotor number (say, 0)?

I believe such method is not very good.
When chasing pattern on moving rotor often you’ll end up in hidden area on the wheel where you will not see the ball and that can repeat few times during the spin. It can happen with method I use since the timer is not synchronized to give vibration and the best suitable position but it is not as much.
The ball will meet with same number after 1 sec when the ball is slower than 1s since the rotor moves towards the ball. If chasing such pattern without timer and spotting differences to the wheel frame each time same number and ball meet it will depend a lot on a rotor speed change. If you have wheel where there is a sudden change then you may be ok but still I would prefer to look at one point and each time the ball crosses it notice how much the rotor moved.

I’ve played L.S. visual crossovers for years (ball vs rotor), but did not think to time ball against stationary ref point for identifying a particular ball rev. I’ll have to take this one out for a test drive.

His material you should take only as an idea. From that you can make many variants.

In Scotts volume 2 published 2005 he explaining how on tilted wheel if ball passes diamond 3 o’clock and hits diamond at 12 the results overlap. A bit later I’ve made a video on Google explaining it how advantage is created on 2 or 3 diamonds . 2007 Jafco claimed it is his system paying for advertisements to cash on selling it. 2011 masterroulette.com correcting Jafcos mistakes in explanation I was pointing and sells it as his system. Also Jafco only guess particular ball revolution master roulette adds parts we talked here and suggests targeting revolution which is easier to spot. By my opinion it is still Scotts system and theory of tilted wheel. If in Pitagoras theorem I replace a,b,c with myruleta, myruletb , myruletc it is still pythagotras theorem.

On some wheels you may not spot greater distance as I was explaining from ball 5 to ball 6 on the picture above. In such case you have to deal with what it has. In usual it happens 5-6 rotations before then the ball drops.
In previous post I wanted to point to link with rotor adjustment but I couldn’t find it, so I made a new post which you may like.
http://rouletteplace.com/index.php?topic=1510.0

If you are looking to credit L.S. as the father of VB (N-x ball revs to end), I will follow you on that one, but timing the ball is an innovative variant.

For your example with 3 then 12 o’clock, the rotor would have to be spinning at 1/3 the ball’s last revolution speed to work. If (for example) I had a 12 and 6 o’clock DD, I should try to sweet talk/ tip the dealer into speeding up/slowing down the rotor until it is the exact same speed as the ball’s final rev for this combo to work - Another interesting angle to exploit.

I guess where there is $$ to be made, people will always try to repackage or reformulate a successful theory and resell it.

If you are looking to credit L.S. as the father of VB (N-x ball revs to end), I will follow you on that one, but timing the ball is an innovative variant.

Well I like masteroulette explanation for it but it is something people were doing and 20 years ago. And taking advantage from 2 diamonds is a law on the tilted wheel. Using metronome as we were talking here might be easier.

For your example with 3 then 12 o'clock, the rotor would have to be spinning at 1/3 the ball's last revolution speed to work.

If (for example) I had a 12 and 6 o'clock DD, I should try to sweet talk/ tip the dealer into speeding up/slowing down the rotor until it is the exact same speed as the ball's final rev for this combo to work - Another interesting angle to exploit.

That’s again Scotts area since he plays 2 sec rotors. If ball makes an extra rotation he gets same result, if the ball hits opposite he gets it again.

Can you tell us how to take advantage of 2 pin? or if there is already explained can you put here the link?Thanks! 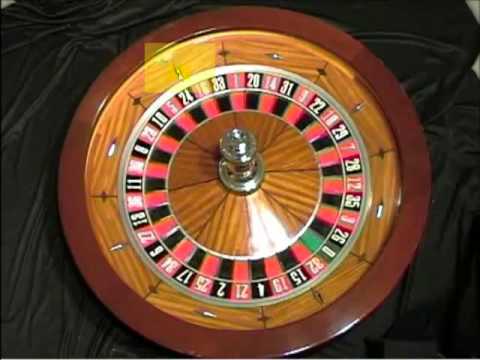 Here is an explanation;

It’s something that is happening on the wheel.