Thank you again for your interest in the subject. Each answer adds to my knowledge.

I understand the importance in determining the rotor speed and also that a variation of 0.5 seconds per turn can move the prediction several squares.

In any case, ignoring this sensitivity for a moment, suppose we play shots that have a speed of between 5 and 6 sec/rev.

If the resulting graph tends to a triangular shape, why does this happen? I wouldn’t be inclined to say it’s luck. If in said range of speeds the distribution were uniform, I think the shape of the curve would be somewhat more “square”. What do you think about this?

I estimate that, in that range of speeds, there is an average. And if so, it is likely that it will continue. I think it’s the only thing I would rescue from the famous Dealer’s Signature; with what average speed does the dealer pushes the rotor.

If there is an average, and it holds, then it is very likely that we can take advantage of it, as long as our method of predicting the ball does not fail.

I am not saying that an offset is not necessary for the change in rotor speed. It just seems empirically not to be that important, especially considering how difficult it can be to get it right in practice. I would try somehow to avoid that step and include a bit of statistics in the matter.

Please let me know your point of view, I propose methods with some firmness but the truth is that I am in this forum to share and also learn.

If the resulting graph tends to a triangular shape, why does this happen?

You know what is Gaussian curve ? All randomness must create it and it sometimes can look as triangle , but if you will collect more data can be other…

You are right. You can have a gaussian curve displayed, and you don’t know if it is because of random data, or we have a target. 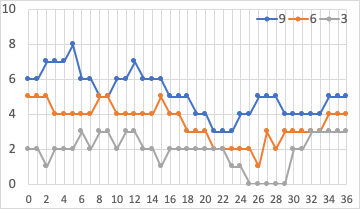 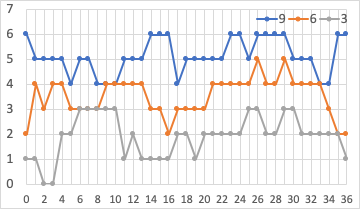 But I think that we can have an edge just by discarding some non gaussian distributions.

I’m sorry but I doubt all this …

Correct me please if I’m wrong.

All is not like you wrote. First gaussian distribution has one stable point ( Reference point ) and some relative random part (distance from Ref point till final number )
But the Reference point is not very stable and Gaussian is beatable only when it is in width say to 20 pockets at least the main part.
So really VB players never play a game with -2.7%. They have or -10% or more or +10% or more and the sum of that must be more than 0…

It’s no hard to find these shapes with random numbers.

With random numbers, almost no chance to see Gaussian distribution, never will see such 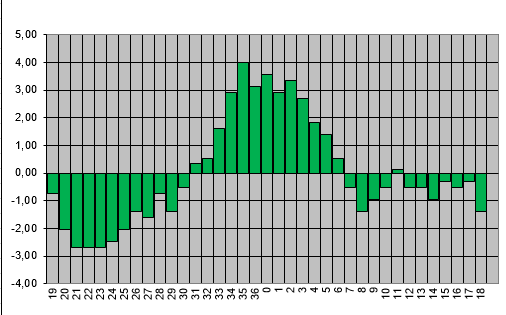 All 37 numbers usually will be in small minus…

With random numbers, almost no chance to see Gaussian distribution, never will see such

You know what is Gaussian curve ? All randomness must create it

You see from one stable place fall balls and that creates a Gaussian curve. Every ball falls randomly but from one place. So Gaussian curve shows the normal distribution.
Numbers - are not normal distribution…because every one of them has the same chance to appear. In Gaussian distribution - the center has the most chances and more to the side - has fewer chances.
Maybe I said something not exactly, but I expected that you know all that because that is near to the school level…

You know what is Gaussian curve ? All randomness must create it and it sometimes can look as triangle , but if you will collect more data can be other…

Say an athlete throws a disk. He is good at this and the disk can fly from 55 meters to 75 meters, so 90% of his throws will be in this interval.
But before each throw, nobody can say which result will be. So from this point of view - the results are random. But are some maximum and some minimal possible results.
In roulette is ideally the same, from your Reference point exist also some maximum and some minimum.
So all talk is here about distances in disc throws or in roulette - everywhere are distances. And distances give you a Gaussian curve.
you long time talked about VB methods and suddenly jump to numbers!

Also, it’s not hard to find some normal distribution with random numbers

You must choose what you talk about - about VB, where important are distances, or about numbers, where distances are - not important.
You cant mix it all…

I practiced around 150 hours with different visual methods, all on live online roulette.

For me it has always been interesting - who are these people, and why do they look for forums where they can post what they come up with?
What is their purpose?

If the goal is to win money, you just go to a casino and try to win it there.
And when you can’t win but you still want to, it’s understandable that they try to find roulette forums or groups.

But then the question again - why start the whole conversation with praise that it may not be difficult to have a +26% advantage?

I participate in several forums and chat groups about roulette.
And in them periodically appear similar peoples, which claims that something invented

What they all have in common is that they soon disappear…
Even in this forum, there was more than one…

The question is why do they disappear without achieving anything?
About 15 years ago I started trying to meet people who participate in forums and groups. Some were quite interesting, educated people.
However, as far as I know, they did not become winners in this game…

However, there are winners, I have seen some and even semi-acquainted with some.
However, they do not come to the forums … and if they do, they never write about their successes

and even less about how they achieved them.
It’s natural - who needs someone to start copying their game? On the contrary - it is interesting to learn how others develop.
But most likely very few people who develop in this area …
Someone said that roulette players are very lazy

…afraid that he was right

Hello! I was unable these days to continue the discussion. Still, I kept thinking about several things you mentioned.
My idea is to share a simple Excel to analyze predictions and results. I think it would be helpful if someone else tries it and shares the experience. In the last week I was able to play only two more times with positive results (130 chips). I think the method works, and why not share it… I suppose it can even be improved, since I believe there are people in this forum with a lot of knowledge on the subject.
Returning, if possible, to some questions…

He is good at this and the disk can fly from 55 meters to 75 meters, so 90% of his throws will be in this interval.

The example is good. I would add that, there is not only a range of 90% of hits between 55 and 75, but a normal distribution of them. I do not believe that the distance traveled would be uniform (same probability for each distance), but that there will be a value in that range that will have a higher probability of occurrence, because of the nature of the throw. This is analogous to the following: the ball travels a certain distance (number of pockets) from a reference number (determined by visual ballistics) to the winning number. That distance, I try to express, could have a normal distribution.

Do we agree so far? Otherwise it is not worth continuing to assume things.

the ball travels a certain distance (number of pockets) from a reference number (determined by visual ballistics) to the winning number. That distance, I try to express, could have a normal distribution.

Yes - you are absolutely right. Only not could have, but should have. Variables, that have some maximum and some minimum (do not need them to know, but know that they are ) should create a normal distribution.
Finding a Reference point is maybe the easiest part of the game only - that Reference point needs that be in some logical interval till the final point.

One of the main parts is how to collect data simply and secretly and how from that data to create some model - what happens, how big change… so how to apply the results of data to our game.

In the last week I was able to play only two more times with positive results (130 chips). I think the method works,

I practiced around 150 hours with different visual methods, all on live online roulette.

Practiced you online, but where do you play?

Online too, rotors in my local casino usually are about 2/3 sec/rev.

Strange - in the middle of spin usually they change the camera somewhere in a moment when the ball is about 1 sec/rot…
Ok, that is maybe not the biggest problem, a much bigger problem is that casinos do all that not to pay money…
I do not have big experience with online casinos, but what I have shown is that they simply do not pay money.
Played on sports bets - is the same in all places was banned after the first transfer of money. Of course, all that was 10 years back, but I do not think that something changed now…